The Milky Way is a complex system, with dynamical and chemical substructures, where several competing processes such as mergers, internal secular evolution, gas accretion and gas flows take place. To study in detail how such a giant spiral galaxy was formed and evolved, we need to reconstruct the sequence of its main formation events with high (~10%) temporal resolution.

This research project will make fundamental advances on our understanding of the assembly history of the Milky Way. As reviewed above, such a goal can only be achieved via a much improved inference on stellar properties, and understanding of stellar physics. This motivates the following two major work packages:

Asterochronometry will set up an interdisciplinary team composed of experts in stellar modelling and asteroseismology and in Galactic structure and chemo-dynamics. Each of the two broad research themes of the project is subdivided into tasks:

Asterochronometry will determine accurate, precise ages for tens of thousands of stars in the Galaxy. We will take an approach distinguished by a number of key aspects including: developing novel star-dating methods that fully utilise the potential of individual pulsation modes, coupled with a careful appraisal of systematic uncertainties on age deriving from our limited understanding of stellar physics.

The Asterochronometry project will also provide stringent observational tests of stellar structure and answer some of the long-standing open questions in stellar modelling (e.g. efficiency of transport processes, mass loss on the giant branch, the occurrence of products of coalescence / mass exchange). These tests will improve our ability to determine stellar ages and chemical yields, with wide impact e.g. on the characterisation and ensemble studies of exoplanets, on evolutionary population synthesis, integrated colours and thus ages of galaxies.

WP2 will capitalise on the efforts of WP1 by exploiting precise and accurate properties of stars to reconstruct the assembly history of the Milky Way, and to inform models of Galaxy formation and evolution. The combination of CoRoT, Kepler, K2, and TESS data will allow an unprecedented age-mapping of the Milky Way, crucially exploring the inner and outer discs, its vertical structure and the regions adjacent to the Bulge. 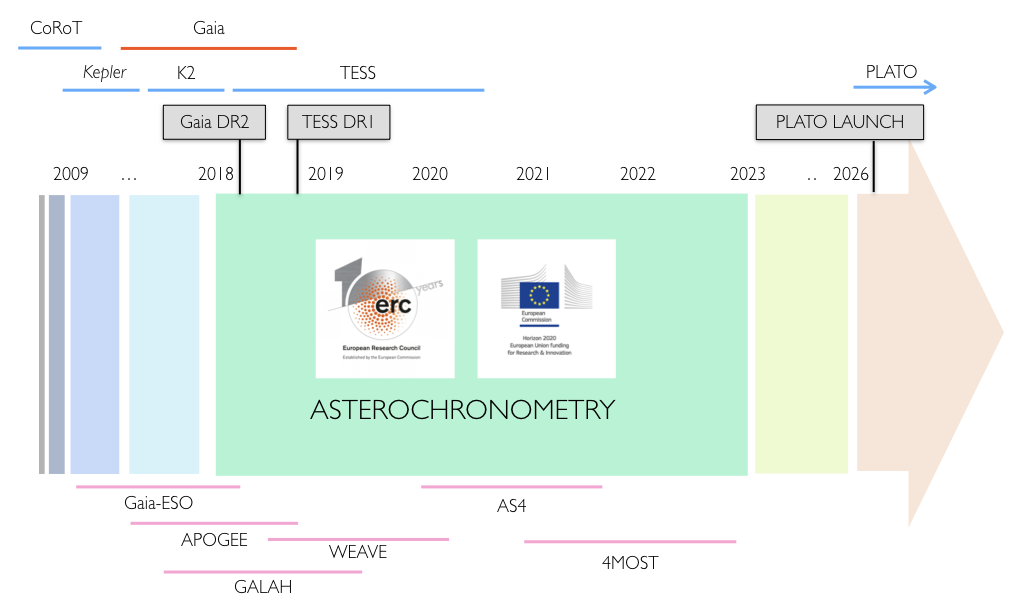