This page features summaries of selected recent publications, written for non-experts. They will highlight some of the range of research done by the group.

The study analyzed a sample of 37 stars within M4: currently the highest number for this kind of study for the distant globular clusters. Of these, most (31) are red giants, very bright stars in the advanced stages of their evolution, having small or intermediate mass, while the other 6 are horizontal branch stars, a later evolutionary stage composed of stars that are burning helium in their cores.

The study succeeded in providing an asteroseismic characterization of the two stellar populations in M4 for the first time, providing a new point of view on the matter, thus integrating what is already in the literature. In the first population, the stars have similar chemical characteristics to those outside the cluster, while stars in the second have completely different chemical characteristics: it is in fact a stellar population born from the material ejected from the stars of the first population. With respect to this issue, the scientists suggest that the average mass difference between the two populations is actually very small, which indicates the two populations were born very close together. This work reveals the enormous potential that asteroseismic studies can bring to this field. However, determining the mass of stars is only a first step. If we had more precise data at our disposal, we could even reconstruct in detail the structure and internal rotation of stars belonging to different populations, thus clarifying their different origins. This is one of the main scientific objectives of HAYDN, a proposal for a future ESA space mission that we are pursuing together with a large European consortium.

The chemical composition, location, and motion of the stars observed today in the Milky Way encode precious information about their origin and history. By combining the precise data from the ESA Gaia space mission with those from the high-resolution spectroscopic survey APOGEE, scientists have recently identified the extra-galactic origin of an important population of today's Milky Way halo stars. Through rigorous analysis, it has been determined that they were part of a satellite galaxy (Gaia-Enceladus/Sausage), which fell into the gravitational field of the Milky Way early in its history. To properly understand how this merger affected our Galaxy requires a precise chronology of these events in the early history of the Milky Way.

In this work we have used the frequencies of natural, resonant oscillation modes of stars (detected using data from the satellite) in combination with Gaia and APOGEE data, to determine with unprecedented precision the relative ages of about a hundred red giant stars, some of which originate from Gaia-Enceladus.

Which are the main findings of our study?

Our results have revealed that these accreted stars have similar (or slightly younger) ages compared to the majority of the stars born in situ with a similar abundance of iron, suggesting that when this collision took place, in the first billion years of the Galaxy formation, , the Milky Way was already efficiently forming stars, which now reside mainly in its thick disc (see here for a discussion of the ages of thick-disk stars).


We perform an exploratory asteroseismic analyses of bright red giant stars in the TESS Southern Continuous Viewing Zone (SCVZ), and detect solar-like oscillations in about 6,500 stars. Based on this analysis, we predict that seismology will be attainable for ∼ 300,000 giants across the whole sky!
We also show that TESS CVZ-data make possible studies of, for example, stars in the Asymptotic Giant Branch bump, and the detection of mixed l = 1 modes and rotational splitting in the 1-year datasets. Finally, by combining TESS-CVZ data with spectroscopic constraints and with Gaia astrometry, we demonstrate TESS' strong potential for Galactic archaeology studies, making this data ideal for studies of the local star formation history and evolution of the Galactic disc.


What can we learn about the evolution of stars and the Milky Way when we have available unprecedented observational constraints? This paper explores relations between mass, age, evolutionary state, kinematics and surface chemical composition of about 5,000 red giant stars observed by the mission. Here is a list of some of the (quite varied) questions we address in this work:


Nowadays, the determination of stellar properties often relies on comparisons between observations and the predictions of detailed numerical simulations. However, some aspects of stellar structures are notoriously hard to model. One prominent example is the atmospheres of the Sun and of other stars with convective envelopes. For such stars, state-of-the-art stellar models fail to recover the correct structure because they build on a set of simplifying approximations. In this paper, we go beyond these approximations and show that a more physically accurate depiction of stellar convection changes the picture. Although we only improve upon the description of a small fraction of the stellar structure, our improvements have a demonstrable impact on the global properties of stellar models. In the modern era of high-quality astronomical data, accurate stellar models are key to a better understanding of stars, planets, and galactic dynamics. Our results thus emphasize the need to employ all relevant physics when attempting to model stars, and our model improvements constitute one step towards the next generation of stellar models.


A single bright star in the constellation of Indus, visible from the southern hemisphere, has revealed new insights on an ancient collision that our galaxy the Milky Way underwent with another smaller galaxy called Gaia-Enceladus early in its history. The star was aged using its natural oscillations (asteroseismology), detected in data collected by NASA's recently launched Transiting Exoplanet Survey Satellite (TESS). When combined with data from the European Space Agency (ESA) Gaia Mission, the detective story revealed that this ancient star was born early in the life of the Milky Way, 11.5 billion years ago. The star bears hallmarks consistent with having been kinematically heated by the Gaia–Enceladus collision. Its age implies that the earliest the merger could have begun was 11.6 and 13.2 billion years ago, at 68% and 95% confidence, respectively.


In this paper, we use data from the APOGEE survey and Gaia to measure the mass in stars with different element abundances and eccentricity. By doing this, we place an estimate on the mass of the so-called Gaia-Sausage, showing that it is slightly less massive than previous expectations, but that the halo still has a lot of extra (likely) accreted mass. The stellar mass of the halo is difficult to pin down, but because of the extent of the APOGEE survey data both spatially and in element abundances, we were able to make this new constraint - a first step toward a complete map of our Galaxy's history of assembly.

In response to the ESA Voyage 2050 long-term plan proposal, we have put forward the concept of a new small/medium class space mission, which will improve our understanding of stellar astrophysics and the evolution of clusters, and elucidate the origins of the Milky Way bulge and nearby dwarf galaxies.

The core principle of HAYDN rests on the necessity for long period, high cadence photometry in dense and distant stellar systems, such as globular cluster, local dwarf galaxies and the Milky Way bulge.

Have a look at the HAYDN webpages and at the talk given at the ESA Voyage 2050 worshop for more info!


Using data from the K2 mission, we are able, for the first time, to use asteroseismology to probe the age distribution of stars at various heights from the Galactic plane, well beyond the distances reached by e.g. Kepler or CoRoT.
As the distance from the Galactic plane increases, the stellar population becomes dominated by older stars. The changing distributions not only lend support to the theories indicating the thick disc is older than the thin disc, but reaffirm the desire for precise ages to allow for the confirmation of any possible epoch of quiescence in star formation and age bimodality associated with chemistry. A strong bimodality was also observed in the age distribution for both Kepler and the K2 fields (see figure below), with distinct young and old population. Clear associations with height from the plane and [α/Fe] were attributed to each peak: 5 Gyr - low-α, |Z| ≤ 1.0 kpc (thin disc); 14 Gyr - high-α, |Z| > 1.0 kpc (thick disc). The chemical age dichotomy was also confirmed with the Kepler sample, where the peak at 12 Gyr is due to the α-rich population. Each sample presented contains a minimum, suggestive of a time delay between the formation of these populations.


One of the main challenges of Galactic archaeology is to reveal the Galaxy assembly and evolution history via the age, chemical composition, and kinematics of stars in a large fraction of the volume of the Milky Way. In particular, asteroseismology provides us with the crucial chronological information: solar-like oscillating giants are unique evolutionary clocks owing to the availability of seismic constraints on their mass and to the tight age-initial mass relation they adhere to. Even so, a key information for a better understanding of stellar structure within red giants is still missing: their luminosity. This is where Gaia DR2 comes into play, providing distances for over 1.3 billion sources - which includes red-giant stars observed by Kepler. The synergy between Kepler, Gaia DR2, and spectroscopic surveys offers unprecedented possibilities for stress-testing models of stellar evolution unravelling long-standing problems of stellar evolution and, looking at the bigger picture, for helping disentangle the multidimensional problem of Galaxy assembly.

Hertzsprung-Russell Diagrams of red giants observed by Kepler. The K-band absolute magnitude is inferred using Gaia DR2 parallaxes and the parallax zero-point measured in the Kepler field by Khan et al. (2019). Spectroscopic constraints from APOGEE are used to provide information on the effective temperature and chemical composition. Finally, asteroseismology offers precise and accurate ages for these stars (Rodrigues et al. 2017), leading to a very informative Hertzsprung-Russell Diagram and allowing us to create cluster-like sequences of field stars. In the leftmost panel, several red-giant structures are indicated: the red-giant branch bump (RGBb; e.g. see Cassisi 2012), the red clump (RC), the secondary red clump (SRC), and the vertical red clump (VRC; e.g. see Girardi 2016). The other panels first show the selection in age, and then the effect of varying the metallicity.


Accurately weighing red giants is paramount for Galactic archaeology, as these stars act as the standard clocks and rulers to unravel the history of the Milky Way. Currently, the excellent data of the CoRoT and Kepler missions allows asteroseismology to fulfill this role for thousands of stars. More high-quality data can be expected in the coming years thanks to the TESS and PLATO missions. In this study, we adapt and test advanced seismic analysis techniques which had been developed for the main-sequence phase (core hydrogen burning stars) on red-giant stars. We show that these techniques can provide very accurate values of the mean density of red giants, beyond what is achievable by current approaches. We demonstrate the accuracy of our modelling approach by applying it to a sample of eclipsing binaries. The enclosed figure demonstrates that we obtain masses in all cases in good agreement with those determined from eclipses, where other seismic approaches failed to do so. Moreover, the robustness of our approach, which couples seismic inversions to the Bayesian AIMS modelling software, is well-suited for automated pipelines and thus the analyses of large samples of red giants required for Galactic archaeology. Coupled with the recent Gaia data release, our method leads to mass determinations of red giants below 10% in accuracy, reducing significantly the uncertainties on stellar ages and paving the way for in-depth Galactic archaeology. 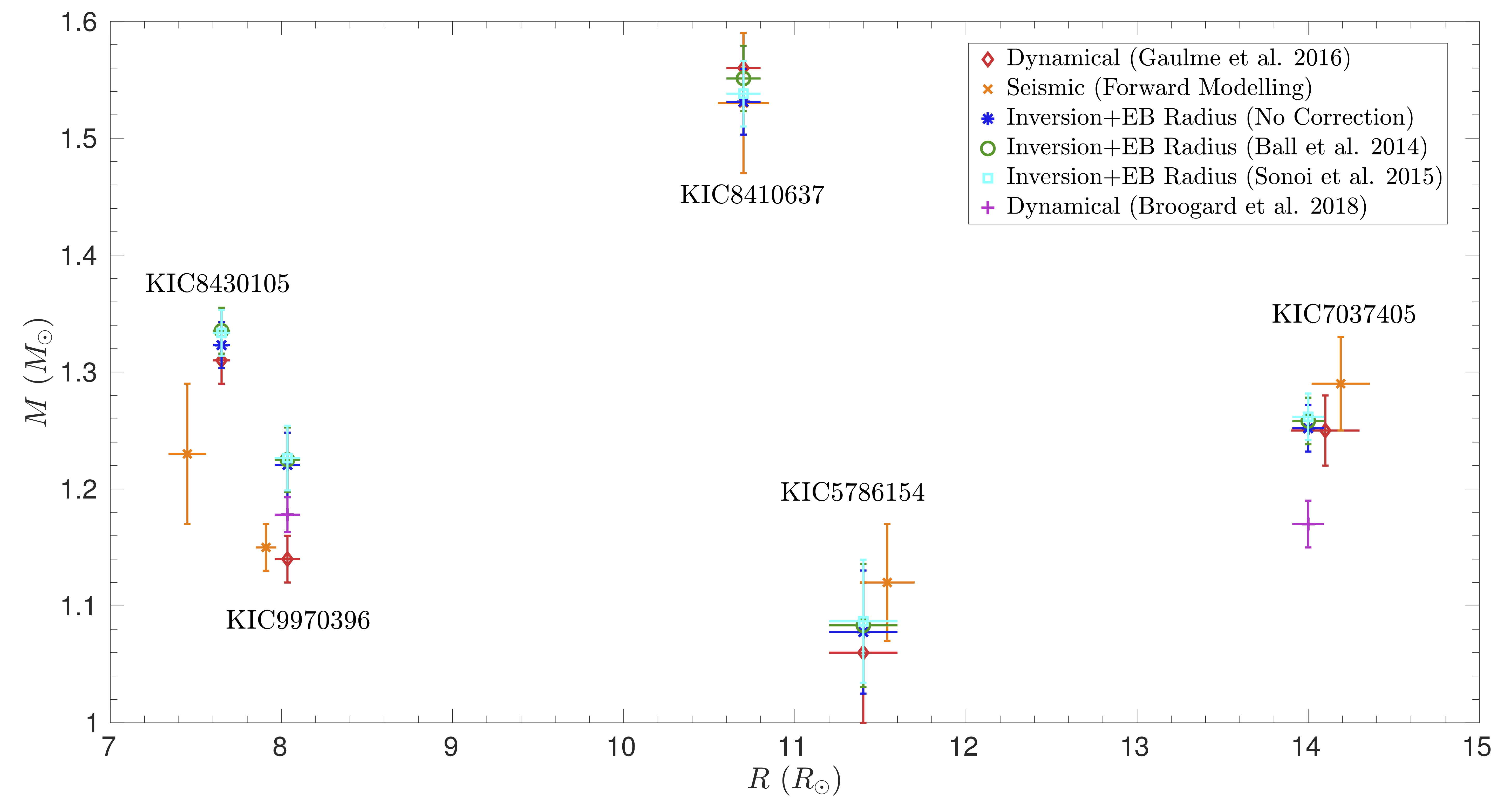 Masses and radii for a subsample of eclipsing binaries determined from the eclipses and from various seismic methods.